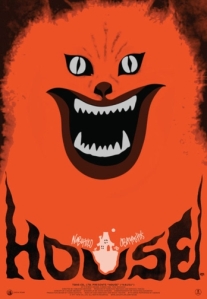 A few weeks ago I went down to The Pacific Cinematheque (one of my favourite haunts) to check out House (Hausu). I didn’t know what to expect, other than that it had become a cult classic in Japan. To this day I am not sure if anything could have truly prepared me for the insanity that awaited. The story follows a group of 7 school girls on their summer holiday. The lead protagonist, Gorgeous, (each girl is named after a ruling personality attribute ie. Prof, Kung Fu and Fantasy) convinces the girls to come visit her aunt out in the country who she hasn’t seen since her childhood. Unfortunately her aunt is haunted by the memory of her lost lover, and has since become a malevolent spirit in possession of a demonic cat, a sinister house and a ravenous hunger for young girls. Gorgeous and company soon learn after the mysterious disappearance of some of their group, that they’ll have to rely on their wits and individual strengths to discover the secrets of the house if they want to make it through the night alive. House is completely deranged, and I do mean that in the most complimentary sense. Released in Japan in 1977, it only began to be distributed in North America in 2009. House fuses genres, taking a typical horror storyline and turning it on its ear, combining it with comedy and melodrama. Part soap opera, part paranoid delusion, House makes ample use of wind machines, vaseline on the lens gauzy effects and stage blood. One of House’s strongest points is that it takes ideas that are genuinely creepy and pushes them over the edge to comic absurdism. Furthermore, the experimental effects utilized by director and producer Nobuhiko Obayashi are hands down the highlight of this film and maximize its surreal impact. Nobuhiko Obayashi reportedly wanted to achieve an unrealistic look and makes use of paint, animation, and over the top stage gore. Not willing to compromise his vision, Nobuhiko uses these effects to bring his audience memorable images of murderous pianos and renegade lamp shades. It is honestly difficult to find a flaw in this film, since I believe that every element contributes to the overall feeling. While the acting is amateur and over the top (Obayashi used mainly non-actors) and the dialogue inane I feel that it all just adds to the experience of Obayashi’s funhouse. This film is not for everybody, but for anyone who wants to let go of all sense of reason and just have fun for an hour and a half, House provides a surreal and ridiculous dreamscape, and it’s well worth it.